The Last Wedding in the Homestead Shul

by Tammy Hepps on December 14, 2014 in Articles, Pictures

Last week I had the pleasure of meeting Deborah Baron and speaking to her mother, Iris Stein Nahemow, by phone. Even before Deborah reached out to me, many Homesteaders asked me if I heard about the last wedding in the synagogue. It was clearly an event that touched everyone’s hearts.

The Stein family has deep, deep roots in Homestead’s Jewish community. Iris described her father, Morry Stein, as “just so emotionally linked into everything there,” and he passed down that love to his children and grandchildren, even though they grew up in Pittsburgh. When it came time for her wedding to David Baron, Deborah was happy to have her mother handle most of the planning, but her one request was to have the ceremony in the Homestead shul. At first Iris said, “No way.” It felt impractical to her — since they couldn’t have the reception there, it seemed too much to ask their guests to drive from one location to another. Behind the scenes, Deborah’s father, Marty Nahemow, pointed out to Iris that it was the one thing Deborah was asking for. Eventually Iris came around.

At this point the shul was down to a small group of men who met for minyan on Sunday mornings. Iris gave a call to Bernard Stein (no relation), one of the organizers of the minyan, to find out if it would be possible. He told her to come to shul that Sunday morning, and so she did, discovering once there that he hadn’t told anyone that she had called, because, “in case you didn’t show up, I didn’t want people to be disappointed.”

Well, the remnants of Homestead’s Jewish community threw themselves whole-heartedly into preparations. They cleaned the interior of the synagogue from top to bottom and even hired someone to paint the front steps. 1 Everyone knew it was the last hurrah for the synagogue, and they wanted the old building to shine as it once did. They also dug out of a closet the synagogue’s chuppah, which had hung over so many couples throughout Homestead’s history. After who-knows-how-many years on rusty hangers, the chupah had heavy stains. No one thought it could be made usable — and yet, after dry cleaning, it was restored to perfect condition. As Iris tells it, “I always felt it was another blessing for the event.”

On the day of the wedding, family members came a half-hour early to sit in their parents’ old seats. One relative, usually quite unsentimental, went up to the balcony and sat in her mother’s seat and cried. The ceremony itself “turned out to be so special,” Deborah remembers, far more than she had expected.

And so, thanks to Deborah’s deep connection to the Homestead shul — and her generosity with her wedding album — I am pleased to be able to share these pictures with you of the last time the shul rang with — to use the words on the chuppah — קול ששון וקול שמחה, קול חתן וקול כלה, the sounds of joy and gladness, and the voices of bridegroom and bride. 2

More about the chuppah 12/5/1942 thank you letter from the synagogue to Mrs. Glick for the chupa (click to read full-sized)

The meeting minutes of the synagogue’s Board of Directors reflect that by 1940 the growing number of weddings taking place in the shul led the community to decide to purchase a chuppah. Though they began to raise money for it at the Chevra Kadisha banquet in December 1940, the “Mrs. Morris Glick family” decided to offer it outright to the synagogue as a gift “in honor of their father, Morris Glick,” who had passed away the year prior.  In the pictures you can see his name at the center of the chuppah. It was purchased in pieces throughout 1941 and by the fall was ready for use. In January 1941 the synagogue determined its “Chupah requirements on weddings held in our synagogue.” The board decreed that for “all weddings held upstairs in the Synagogue, Chupas shall be compulsory.”  The charge for use was $15.00.  3

The chuppah was used in many weddings over the years.  Irwin Gross recalled, “Our oldest daughter was married at our home by Rabbi Pritzker. They brought the chuppah over from the synagogue.”

After the Baron wedding, the chuppah was carefully boxed and given to Ellen Burechson Segal, another mother with deep Homestead roots, who used it for her daughter’s wedding. It is currently stored at Beth Shalom.

Please click on the first picture below to view the full slideshow.  If you have any pictures of weddings in the Homestead shul, please let me know in the comments or below or drop me an email.  Thanks! 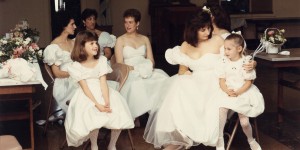 The bridal party in the Vestry Room (basement). As the Vestry Room was not professionally photographed before the shul closed, this picture is a rare opportunity to see what it looked like. 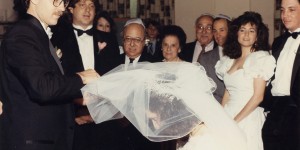 The badeken, also in the Vestry Room, shows off the fabulous curtains that once hung. 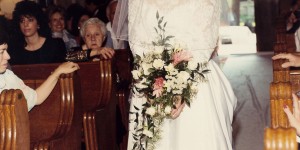 Deborah comes down the aisle, past the pews her grandfather and great-grandfather once sat in. Behind her the open doors give a view of the street. 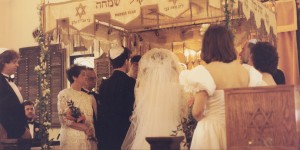 Bride and groom at the chuppah. Note the dedication to Morris Glick across the front. 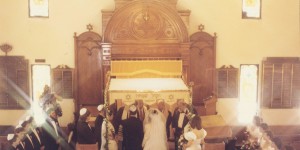 A view of the ceremony from the women’s balcony.

1 comment for “The Last Wedding in the Homestead Shul”