Although Zionist sentiment had been rising in Europe throughout the 19th century, the birth of the modern Zionist movement is considered to be the First Zionist Congress organized by Theodore Herzl in 1897 in Basel, Switzerland, out out which came the World Zionist Organization.  In the U.S. the Federation of American Zionists (renamed the Zionist Organization of America in 1917) was founded in 1897 in NYC and expanded to cover the whole country the following year.  Pre-existing Pittsburgh groups dating back to before Basel joined at that time, and subsequently additional groups were organized.

The earliest instance I’ve found of a Zionist group being organized in Homestead was from January 1903 (see articles below).  This was six months before the the Federation of American Zionists held their national conference in Pittsburgh, “[establishing] Pittsburgh as an active Zionist community, and proceeds from the event helped fund the Zionist Institute of Pittsburgh, on Centre Avenue, in Pittsburgh’s Hill District.” (source)  The Homestead group remained active — on 11/13/1903, the Criterion reported, “A rousing mass meeting under the auspices of the Homestead Zion Society was held last Sunday at the Homestead Synagogue. Rabbi Ashinsky, Mr. Pearlstein, and Mr. Nevins made stirring addresses, and Rev. Graffman inspired the audience by his masterly rendition of Zionistic songs.”

By January 1904 that there were twelve societies in Pittsburgh and one each in McKeesport, Braddock, Homestead, Carnegie, Greensburg, Beaver Falls, and New Castle representing 2,000 members in the Zionist Council of Pittsburg, which fed into the American Federation of Zionists. 1  They had a convention in McKeesport on 3/6/1904 that included many Homesteaders amongst the 150 delegates and 1,000 visitors. 2  And on 8/24/1904 “Zion day” was celebrated at Kennywood Park by the Jews of Western PA from the 3,000 members in the vicinity.  They enjoyed sports, dancing, and an evening concert.  (Notice the growth from February to August 1904 alone!)

Alas, after the Homestead group’s attendance at Zion Day in 1905, I didn’t see any more mentions of this group until the teens. 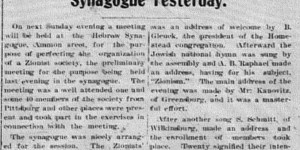 1/12/1903: Preliminary meeting to form a Zionist group in Homestead 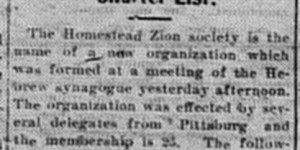 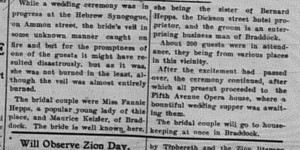 The strange thing about the mentions of Zionist activity in Homestead starting in this decade is that each time a group is mentioned, it seems to be a re-start.  On 3/8/1910, The Jewish Criterion reported, “Allegheny, Braddock, Homestead, and Connellsville are the places where local societies will hereafter carry on Zionist work.  The members of these new societies, it is reported, all appreciate the task before them and take up the same with great enthusiasm.”  The next mention is possibly of their group attending a Zionist dance in 1911.  And that is all for the time being.

As a result of the efforts of Mr. P.M. Raskin, who recently visited this district a Zionist Society has been organized in Homestead. The organization meeting was held at the home of Dr. and Mrs. David Reiter and the officers chosen to complete the organization work are as follows: Dr. David Reiter, president; Mrs. Herman L. Little, secretary; Mr. Joseph Lasdusky, treasurer and Dr. M.H. Moss, Mr. Morris Grinberg, Mrs. David Reiter and Mrs. Hyman Sapeer, membership committee. The next meeting will be held Monday night, December 27th, 1915, at the home of Mr. and Mrs. Herman L. Little.

It’s possible that this group’s activities fell off as the greater urgency in the Jewish community was around helping “Jewish war sufferers” in Europe.  About a later period, Allen Smooke reported about the Sapeers, the leading Zionist family in Homestead, “They were Zionists. Oh, that was a bad word. That was a bad word years ago. They were Zionists. That was almost like saying they were Communists… You were taking money away from the people in Europe that had the problems and sending it to Israel. You’re talking about back in the late ‘30s, early ‘40s. I’m talking from like ‘36 to maybe ‘41 or ‘42. I remember that family. That’s all they were interested in…They were doing the right thing all along, and nobody knew it.”  It’s possible this attitude also prevailed during and after WWI (before Allen was born!).

Then again on 2/7/1919:  “Arrangements are being made for the organization of Zionist Districts in Donora, Monessen, California, Brownsville, Braddock, Homestead, Carnegie, Bradford, Tarentum, Kittanning, Canonsburg, Indiana, and Latrobe.” My guess is that the overzealous New Yorkers sent by the national ZOA were intent on making existing groups true ZOA “Zionist Districts?”

On 4/24/1919 and 7/20/1919 the Western Pennsylvania and Western Virginia Zionist conferences included a Homestead contingent amongst many other small towns’.

Separately, the Jewish National Fund, founded in 1901 to buy and develop land in Palestine, had a presence in Homestead in the teens.

The Jewish National Fund Commission of Homestead, recently organized by Dr. B. Epstein will hold a public meeting Sunday, evening, February 4th, in the Homestead Synagogue. Dr. H. M. Snitzer, president of the Zionist Council of Pittsburgh will speak on “The Jewish National Fund” and Mr. M. L. Avner, president of the local Jewish Congress Committee will speak on “The Jewish Congress.” There is no man better acquainted with all details to the coming Jewish Congress than Mr. Avner is, nor is there anything before the Jewish people of America at the present time of more importance than the Congress. No one who has the opportunity to become acquainted with this great institution should neglect it; and every one in Homestead and surroundings will have that opportunity Sunday evening, February, 4th. The Jewish National Fund Commission of Homestead cordially invites all to attend this meeting.

If there were qualms at the beginning of the decade about diverting money to Israel that could help their brethren in Europe, those qualms had faded by the end of the decade in the face of rising violence in Palestine.  Organized Arab attacks against Jewish settlers began in 1919 and escalated through the 1920s, with the 1929 riots in Jerusalem and massacre in Hebron getting particular attention.  Apart from the activities of the Zionist group, which I detail below, the shul raised $355.50 in September 1929 “for the sufferers in Palestine, who are attacked by Arab rioters.”  These current events, plus the growth of Zionist umbrella organizations, likely contributed to the growth of Zionist activities across America throughout this decade.

Homestead’s attendance at regional Zionist conferences continued.  I found references to their attendance at ones held on 12/3/1922, 3/9/1924, and 6/1/1924.  (Probably there were others — OCR is finicky.)  You’ll see the Sapeers continue to be involved on a local level and within Pittsburgh as well; when a new (?) group, the Zionist Regional Union, was “permanently organized” in Pittsburgh on 11/25/1923, H. Sapeer joined its finance committee.

It’s clear that the Homestead group was active and growing throughout this decade.  From 11/15-12/15/1923 there was a membership drive for Zionist membership; Homestead accepted a quota of 50 new members to hit the region’s goal of 2000 members.  A similar membership drive in late 1928 named B. Friedlander at the captain of the Homestead district, and one in May 1929 had Dr. M.H. Moss as chair. 4.  (Again, probably there were others OCR did not pick up.)

Much of what the Homestead Zionist group did was help fundraise.  A new group founded in 1920, the Keren HaYesod (the “Foundation Fund,” whose goals were building the land and supporting its pioneers) — today known as the United Israel Appeal — took root in Homestead in 1922:

KEREN HAYESOD ACTIVITIES RENEWED IN PITTSBURGH AND NEARBY TOWNS

Campaigns Under Way in Washington, Uniontown, Homestead and Several Other Cities

And again a month later:

At a public meeting last Sunday evening Mr. A. C. Stein, of Pittsburgh, made an eloquent plea for the Keren Hayesod. As a result $400 were pledged by those present, each pledge being accompanied by a substantial payment.

At a committee meeting, which took place the following day, teams were appointed to visit every Jewish resident of Homestead to obtain subscriptions. The following have volunteered to solicit pledges:

It is expected that the committees will be properly received and the Homestead Jews will respond generously to this great cause.

On August 20, 1925, the shul‘s board reported that Keren Hayesod (and HIAS) had requested permission to send its own representatives or have the congregation raise a collection on Kol Nidre night.  They chose the latter; Morris Frankel was appointed to do a house-by-house canvas to collect funds. 6

A new fundraising effort, the United Palestine Appeal, was organized in 1925 as a partnership between Keren HaYesod and the Jewish National Fund, leading to more ambitious goals for Zionist fundraising in Homestead in 1926: “With a quote of $1,000 as its goal for the United Palestine Appeal, Homestead Jewry is entering upon the task of raising that amount.  The drive opens on Monday, March 22nd.  Mr. B. Friedlander, chairman of the Zionist District of Homestead, is chair of the Homestead Appeal.” Of the $33,000 Pittsburgh raised, Homestead contributed $573. A similar drive in May 1929 was under the chairmanship of Dr. M.H. Moss. 7

Beyond fundraising, the group also organized public events for the community.  On March 7, 1920 the Homestead Zion District arranged a Purim Festival held at the shul.  The officers named at the time were  J. Lasdusky, President; B. Lazar, Secretary. 8

This event from 1924 is of particular interest for their inclusion of the Resnick family:

Homestead, Pa.:—Under the auspices of the Zion District an entertainment and lecture will be given Sunday, March 30th, at 8:00 o’clock P. M., at the synagogue on Tenth Avenue.

A very fine program has been arranged. Dr. H. J. Stern, Rabbi of the Temple Israel, of Uniontown, will be the speaker, and Miss Gertrude Lieberman, of Pittsburgh, will render several vocal selections. A group of Palestinian songs, in Hebrew, will be sung by the children of Mr. Meyer Resnick, of Palestine. Mr. Resnick himself will give his impressions of Palestine, where he and his family resided for years.

Everyone is urged to attend, as the program will be entertaining as well as instructive.

A month later another event, this time in Pittsburgh, included amongst the performers the same Resnick family along with another Homesteader:

Mr. Louis Lipsky, Chairman of the National Executive Committee of the Zionist Organization of America, who has just returned from London, will be the principal speaker on Sunday evening, April 27th, at 8:15 o’clock, at the Zionist Institute.

…A delightful musical program has been arranged as follows:

A piano solo, by Miss Sadie Weiss, of Homestead, Pa; Palestinian songs and dances by Clara, Esther and Mordecai Reznick, of Homestead, Pa. (formerly of Palestine). An orchestra composed of Peabody and Schenley students, will render several selections. A cordial invitation is extended the general public to be present.

The crazy story of how I came to be so well acquainted with this family and the sad explanation for why they left Israel for Homestead are footnoted below. 9