Program from the 50th Anniversary Banquet

by Homestead Hebrews on March 19, 1944 in Documents, Programs

This program was the first item I viewed from the Heiman Jacobson scrapbooks when Linda and Robert Daniels shared them with me.  I hope you don’t think me maudlin if I admit that I burst into tears when I saw it.  I didn’t believe any copies had survived.

The fiftieth anniversary celebration is notable for being the last with the synagogue’s historian and charter members present (including my great-grandfather).  Occurring at the height of World War II, celebrating the communities success must have been tinged with much sorrow as the community reflected on the situation of their brethren in Europe and their sons who were away fighting.

May our Congregation, now numbering about 250 members, continue to prosper and be an asset to our community and country, and may our boys come home and live happily in this land of the free and home of the brave. Cover to the program First page of the program Last page of the program and inside back cover 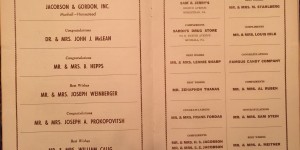 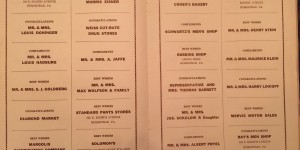 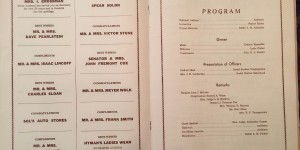 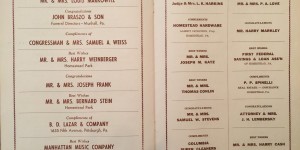 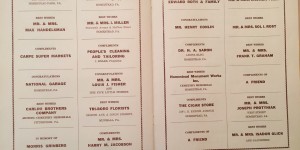