The paper is always too bullish to be reliable, but it does appear that business began to turn around this year after the depression that began in 1907.  Overall, though, news mentions of the Jewish community were still fairly low compared to even a couple years prior.

Unrelated to Homestead, and of little interest to me, but likely exciting to you and our ancestors is that the Pittsburgh Pirates won the World Series in 1909!  It was covered by the Homestead paper in a modest way. Afterwards they wrote, “the curtain is down on baseball and everybody seems happy except those who bet on Detroit” (10/20/1909).

In 1908 Homestead had a very successful parade. Would they repeat the feat?  As of 10/2, it appeared they might not.  “Are we going to have a Hallowe’en celebration?” asked the paper.  “The old committee refuses to solicit money this year and unless some one else undertakes the task there is not likely to be anything doing.”  At least $10 was needed for music and prizes.  And yet five days later the paper reported that the committee was arranging a big parade, “all efforts of previous years to be surpassed.”  Since Halloween was on a Sunday that year, and Duquesne and McKeesport had already claimed Friday night for their parades, Homestead chose Monday, 11/1.  “The Homestead celebration has become so well known a large delegation of spectators from those places are expected down” (10/23), and hundreds from Braddock, too (10/26).

But what you really want to know is whether the Klan would re-appear, right?

It seemed there would be some prizes for costumes. “The Homestead sporting goods company have offered a real live possum to the best made up colored man in line. The white folks are barred from competing for this prize” (11/1). There were other costume prizes, too, like for the “best female impersonator” (11/2).

The day after the parade the paper reported it was “most creditable in every way.”  Eighth avenue was the most crowded it ever was. “The formation of the parade was as follows: Mounted aids on horseback” — all the aids, or just some? — “Monongahela band, the Monongahela Klu Klux (sic), mass of children in fantastic costumes, about 300 including a menagerie of elephants, camels, a large rooster and something that looked like a Carnegie diplodocus, gotten up by Stahl’s theater…” Floats by the businesses brought up the rear, including ones by the Little brothers, and Meyer I. Grinberg.  “What made the Klu Klux cluck so much after the parade?” joked the paper.

In mid-December the Hallowe’en committee reported its expenditure.  The second-highest expense was $40.00 to the KKK!  (The first highest was $55 to Walker for two bands; all the rest of the expenses were in the $10-15 range or lower, including $2.50 to Joe Freed for a prize.)

On 2/5 the paper reported that there would be a big increase in liquor license applicants from Homestead.  On 3/24 the paper reported on the Homesteaders in license court.  There were seven new applicants in the Second ward, of whom, they noted, five had english names.  “The argument to the court was that the majority of licensed saloons in that ward were under the control of foreigners, and it was almost impossible for an English-speaking person to secure a suitable meal.”  On 4/2 the paper reported that there were only two changes overall the license list.  Granted were Bernard Hepps, 406 Dickson street and Samuel Margolis, 525 Heisel street.  Refused was Edward A. Hertz, 301 Dickson street.  It was believed the court was lenient due to the depression in business (4/2).

On 4/9 the paper reported that all but two of the applicants for wholesale license were held over, including Adolph Hepps & Samuel Markovitz, 465 Fourth avenue and Ephraim Marks, 222 Eighth avenue.  It was expected that none would lose their licenses, but they would be penalized for “the meeting of the wholesalers held last year just before the license court, which the court questioned the applicants so closely about this year. It came to the ears of the court that at this meeting all present had agreed to go into court and deny that they had any solicitors out, whether they had or not.” On 4/22 the paper reported that the wholesalers were called into court Saturday morning — most unusual! All were uneasy. “Speculation is rife…many believe that they will be censured by the court, while others are inclined to the opinion that a number will be refused. The entire trouble is the outcome of an alleged meeting, which the wholesaler dealers held last year prior to their advent in the license court, when it is alleged that the matter of solicitors was discussed.”  On 4/24 the paper reported that all got their licenses, and none were punished.  Phew!

Sixteen years ago Morris Grinberg started up a small china and notion store at the corner of Eight-av and Gold alley. Through good treatment and the use of business methods, the business grew so rapidly that within a few years that room was too small for the business.  Then Mr. Grinberg secured a larger store, just a couple of doors below.  The business has continued growing in the new stand and it became too small for the immense stock that he carried, and in the year 1909 he leased a piece of ground and put up a building 25×110, with a large basement, and then opened up a general department store.  The business thrived in the new building, just as it did in the old, and at the present time Mr. Grinberg has one of the largest stores in the town, handling the best goods in ladies’ and gent’s furnishings, the finest line of china and house furnishings, floor oilcloth, linoleums, wall paper and a complete line of hardware and cutlery. 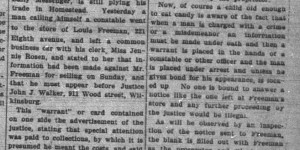 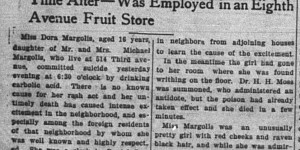 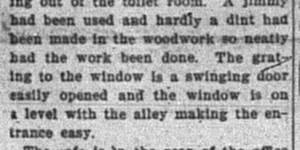 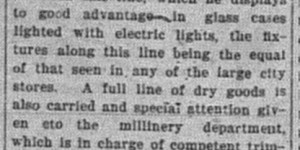 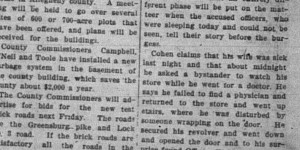 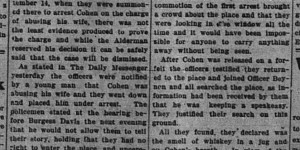 10/16: The Officers’ Side of Cohen’s Larceny Charge 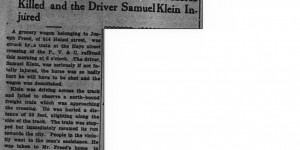 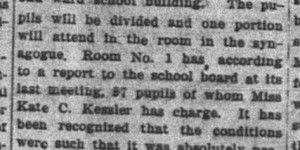 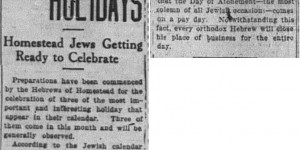 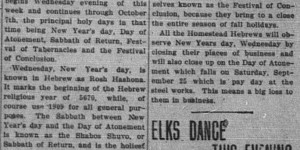 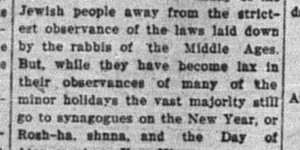 9/15: Jewish New Year: It Will Be Ushered in at Sunset This Evening — Stores to be Closed 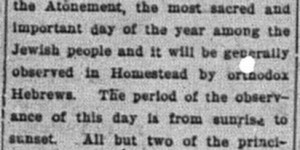 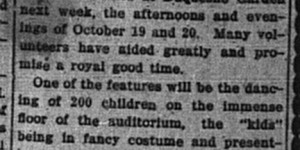 Ads for the following merchants appeared in the paper during the year.