Though economic conditions continued to be strong, the coverage of the Jewish community never rebounded to its levels at the start of the decade during the earlier boom. The “Local Briefs” column, for years the best source of tidbits about the doings of people in the town, started off the year quite short, and though by March it was back to its previous length, there were almost no mentions of Homestead’s Jews, whereas before I’d find many.  There were also far fewer longer news articles than in previous years.  As the town grew rapidly, the bar for what counted as news was continually raised, leaving out the kinds of stories that were commonly printed in the past.

Nevertheless, what stories the paper did cover demonstrate the growing prominence of individual members of the community, as well the community’s ability to organize as a whole.

On 2/12 the paper reported that there were 2,953 applications for liquor licenses in Allegheny county – one more than last year. In Homestead there were 72 applicants, including Philip Cohn, 404 Dickson street; Bernard Hepps, 406 Dickson street; and Isaac Hertz, 543-545 Fifth ave. (Munhall was the only borough outside of the prohibition towns to be without an applicant.) “There is small chance for an increase in the number of licensed houses in Homestead and the only hope of the new men is that some of the old ones will be knocked out” (2/26). The wholesale applicants included Adolph Hepps, 465 Fourth ave.; Ruben Schermer, 412 Dickson street; Louis D. Moskowitz, 206 Sixth ave.; and Sam W. Schwartz, 100 Eighth ave. (3/10).

License court opened 3/19, and on 4/2 the Homestead applicants were up. “The second ward was then taken up and the list gone over very rapidly Two steel works officials were in court to testify against certain applicants in this ward and several sensations are promised before the Homestead list is completed, which will be late this afternoon.”

The Second ward applicants for liquor license occupied the attention of the court nearly al of yesterday afternoon…The Second war list is distinguished by the unusual feature that about one-third of the applicants are new ones, and almost each and everyone of these gave the court the plea that there were not enough hotels in the ward at present to accommodate those who want to board there…

The next league remonstrance was brought against Bernard Hepps, who conducts a hotel at 404 Dickson street, Second ward. Detective Carl C. Mong appeared against the applicant and testified that he had twice visited the saloon and had on one occasion seen a drunken man buy whiskey on trust. One his second visit he saw the same violation repeated.

The next applicant called was Isaac Hertz, of 543-545 Fifth avenue and again Detective Mong was called upon to testify by Attorney Paul S. Ache. He stated that on the evening of December 26 he had called at the applicant’s saloon and found the barroom crowded, several men being visible under the influence of liquor but still allowed to buy drink. Mong further stated that two foreigners dressed in gay uniforms paraded up and down the barroom giving a short of millinery drill. The applicant denied the accusation that he sold to drunken men, but admitted that on the evening mentioned the Slavonians attired in the bright uniform on some secret society had visited the saloon, but asserted that they had not given any drill or caused any disorder.

The birthday party and confirmation of Ralph Lasdusky, son of Mr. and Mrs. Joseph Lasdusky, was celebrated last night at their home on Ammon street The house was elaborately decorated in honor of the occasion and everything in connection with the event done up in style. The family was served with dinner at 5:30 and at 7:30 the reception to the guests took place, there being over 100 present, they coming from the city and all the surrounding towns.

Master Ralph made a splendid speech in connection with his confirmation, along the lines of morality and right living.

Music was furnished by Prof. Alderman, of Pittsburg, and some good local talent was also introduced. In the midst of the merry making a surprise was sprung by the announcement of the engagement of Miss Annie Lasdusky, the daughter of Mr. and Mrs. M. Lasdusky, of Pittsburgh, and a sister of Joseph Lasdusky, to Max Glick, a well known you man of this place. Mr. Glick is the manager of Mr. Lasdusky’s store in this place. The engagement will terminate in an early spring wedding. 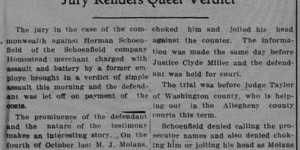 1/11/06: Herman Schoenfield got off for choking an employee who wanted a salary advance 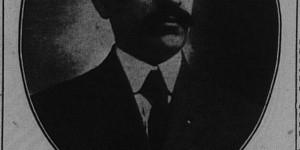 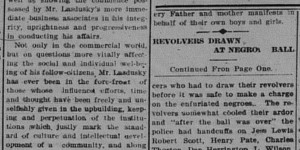 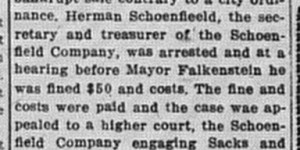 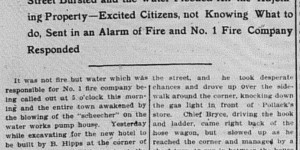 3/9/06: Flood on the construction site for my great-grandfather’s new hotel. 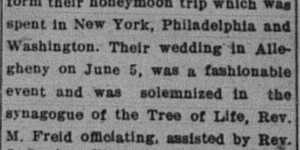 6/15/1906: Samuel Cohen returned from his honeymoon with his new wife. 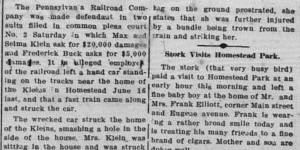 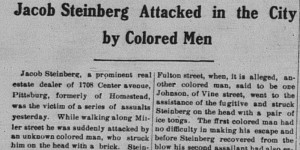 10/4/06: Former Homestead resident Jacob Steinberg was the victim of an assault in Pittsburgh. 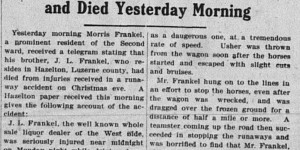 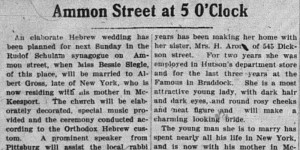 The affair was in the charge of Mrs. Morris Frankel, Mrs. Marks, and Mrs. Gluck, to whom great praise is due. The ladies’ society will realize handsomely from the proceeds. On 4/18 the paper carried a large headline about the 1906 San Francisco Earthquake, which took place that morning. The following day the headline was, “San Francisco is Doomed.” The day after, “The beautiful city of San Francisco will be transformed into a heap of ashes. Not a house left on the peninsula.” Major front page coverage, including photographs, continued for days — an unparalleled focus on any event, local, national, or international, and Homesteaders couldn’t help but respond to the tragedy. On 4/20 they began to raise money. Amongst the earliest Jewish contributors were the usual leading business men — Half Bros., who gave $25, Morris Frankel $10, Schoenfield Co. $5, and Wolk $2.  Then on 4/27 the paper announced the the Hebrews were initiating their own fundraising effort. “M. Marks, Joseph Lasdusky and J. (sic?) Grossman are the committee to solicit subscriptions among the Hebrews, and as will be seen by today’s issue they have secured almost $100 in the last two days.” The fundraising efforts, both within the Jewish community and in Homestead at large, went on through early May. The Jews raised $95 of the town’s $1,042.55. The Hebrew Fund, printed in the paper on 4/27 and reprinted 5/1, included: 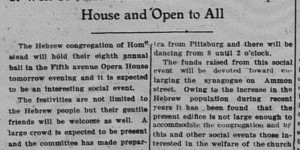 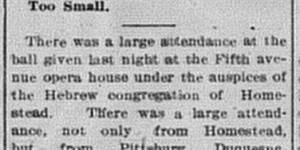 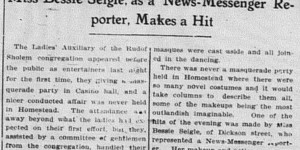 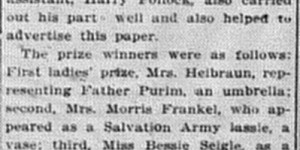 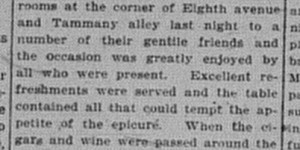 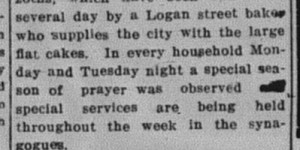 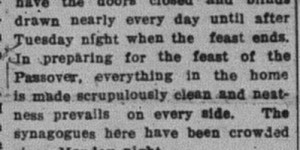 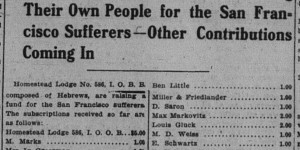 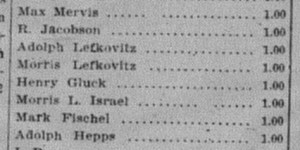 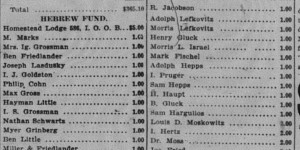 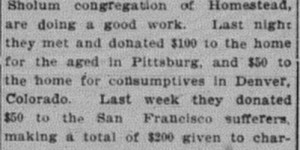 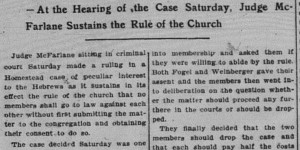 6/25/1906: The newspaper supported the synagogue’s rules regarding disputes between members. 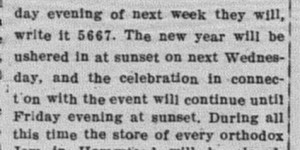 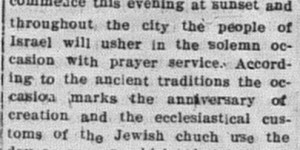 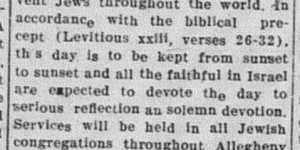 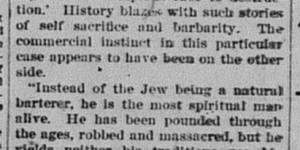 10/5/1906: This strange article about Jewish persecution must have provoked quite a response from the community.