May 8, 1899: Hijinks ensued when Morris Markowitz‘s bike was stolen. Click to zoom.

As you’ll see, many of these listings concern new stores opening in Homestead.  There were many such notices in the paper throughout 1899; I selected only those concerning members of our community.  A couple I weren’t sure of were Samuel Samuel’s “The New Bon-Ton” (9/12) and Samuel Markle’s “Philadelphia Bargarin Store” (8/28). June 12, 1899: An advertisement for the upcoming opening of Half Bros., which quickly became the leading furniture store in Homestead.

It was a great holiday season for all these stores, new and old.  On 12/19 the paper boasted, “Homestead merchants are offering a large and more varied line of holiday goods than ever before.”  There was a ton of advertising in the paper, including from most of the prominent Jewish merchants.  On the day after Xmas, the paper summarized of the weekend preceding Xmas, “Saturday the stores did a phenomenal business and the merchants are more than satisfied with their returns from the holiday trade. One of the largest firms of the town report their business for the ten days preceding Christmas was 50 percent greater than in former years, and other reports gains in like proportion.”  On 12/21, of the 29 stores singled out for their Xmas displays, the ones from the Jewish community were Segelman‘s Jewelery (sic) store, Lasduskey‘s (sic) Peoples store, Grossman‘s Toy store, Grossman‘s Clothing store, Grienburg (sic) Bros’ Toy store, Skirboll‘s Shoe store, Phil Coen (sic) the Tailor and Gents Furnisher, and Half Bros. Furniture store.

There are plenty of woes listed below, but one which is not is in-fighting.  On 10/26 the paper reported cryptically that Jewish grocers in Duquesne were “warring with each other,” but the paper never reported anything of the sort about Homestead’s local Jewish community.

Caught in the Act.

In the Park–He Sent a Boy up With a Wagon Load About 0 O’clock Saturday Night–A Citizen Frightened the Lad Who Ran Away and Left the Wagon Standing in the Park.

About 9 o’clock Saturday night Harry Maiden, who resides near the park saw a boy drive up and start to dump a wagon load of garbage down into the hollow. Maiden hollowed (sic) at the lad, who became frightened and ran away, leaving the wagon standing in the park. Maiden got in a drove the wagon down to Justice Giles office and turned it over to Health Officer Donaldson. The boy who had been driving the weagon appeared a little later and said it belonged to Adolph Hips, who runs a butcher shop at the corner of Fifth avenue and Dickson street.

Health Officer Donaldson went down and arrested Hips, who plead ignorance of the law. Justice Giles said that would not excuse him and he then plead guilty and was fined $10 and costs.

The boldness of the robbery committed at Philip Cohn’s store on Eighth avenue last Saturday night is worrying the police not a little, as they are unable to get any clew (sic) to the robbery. About 4 o’clock in the morning Mr. and Mrs. Cohn heard the crash of breaking glass and got up and looked out as quickly as possible, but could see no one. An investigation followed and it was found that the front window had been broken at three rolls of pants patterns and two rolls of suit patterns valued at $30 were missing. Nothing else in the window was disturbed.

May 22, 1899: The harrowing saga of how Fanny Markowitz, only 13, disappeared in NYC after arriving in the US. Click to zoom.

Worry of Morris Markovitz Now at an End

A Thirteen Year Old Member of His Family Arrived in New York Last Wednesday From Hungary and After Telegraphing to Her Brother for Money Disappeared–After Much Worry and Many Messages She was Located in the Metropolis Yesterday and is due Here To-Day.

The testimony was filed in the county courts yesterday in the case of Betty Kline against Joseph Kline, of Homestead, in which desertion is alleged. It is asserted that while Mrs. Kline was ill her husband sold out his business, pocketed the proceeds and left after telling some of his acquaintances that he thought his wife was big and strong enough to earn her own living.

Real Estate and Landlording
One of the big surprises to me, which began to emerge in earnest as I read through the paper from this year, is how many of the Jewish community invested in local real estate and became landlords as a side-operation to the store for which they were best known. Being a landlord in turn-of-the-last-century Homestead doesn’t seem like it was a lot of fun, though. 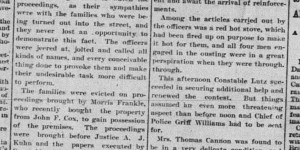 October 13, 1899: The first article in the Frankle eviction saga 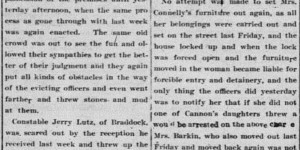 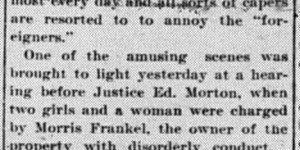 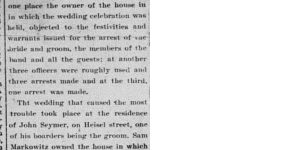 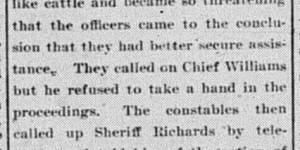 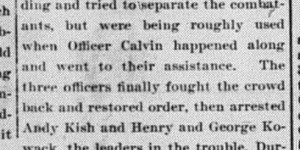 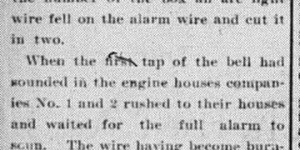 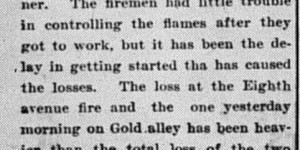 That is the Charge Made Against Mike Weise.

Chief of Police Griff Williams Made the Arrest and Justice Ed. Morton Imposed a Fine.

Mike Weise, who keeps a little fruit and confectionary store on the upper end of Eighth avenue, was charged before Justice Ed Morton yesterday with selling on Sunday. The information was made by Chief of Police Griff Williams, who also made the arrest.

Chief Williams alleged that Weise sold ambrosia, but he was not able to explain just what ambrosia was and therefore simply charge Weise with violating the old blue laws by selling on Sunday.

Ambrosia is alleged to be a beverage which looks like beer, but that is all the experts can say about it. Several complaints have been made to Chief Williams about Weise dispensing this beverage on Sunday, and the Chief decided to put a stop to it and to be on the safe side brought the above charge.

Justice Morton fined Weise $3 and costs which he cheerfully paid.

Morris Blier, son of Mr. Blier, of McKeesport, was done up by a Second ward boy yesterday in great shape. He was completely covered with blood whe his father brought him up to Justice G.W. Giles office, and looked as though a cyclone had struck him.

The boy said another boy about his own age had pulled him from his father’s wagon and knocked him down and beat him, at the request of a third boy whom he caught stealing bottles from the wagon some time ago. A warrant was sworn out for the arrest of the boy who committed the assault, but as all Second ward boys look alike, Constable Frank Bell was unable to locate the right one.

The Hebrew day of Atonement and fasting known as ‘Yom Kippur’ was observed yesterday by the Hebrews throughout the world. There were services in the synagogue here and in Braddock, and it is said prayers were offered up for Captain Dreyfus, petitioning that justice and freedom be given him. Next Monday the feast of the Tabernacles in the Hebrew churches will begin last six days. It is a week of pleasure.

A young men’s Jewish club is being organized in Homestead. One meeting has already been held and the promoters of the organization have met with much encouragement. Another meeting will be held tomorrow evening to complete the organization. The club will be purely social in its objects and gives promise of being a credit to the town. There were ads for: ← Original Deed of Purchase and Plan for the Cemetery
Jews in the News, 1900 →