Unfortunately the scan of this document, which I got from the Pennsylvania Department of State, is very low quality (and at $40, it is the most expensive 3 pages I’ve acquired in my years of my research).  Worse, it seems to be a handwritten copy of the original documents from what appears to be a book of many such official transcriptions, so we miss out on seeing the signatures of the charter members.  But with no further ado (or complaints), here it is — transcript first, and then the document scans at the end.

To the Honorable the Judges of said Court

The undersigned, three of whom are citizens of the United States and of the Commonwealth of Pennsylvania, having associated themselves together for the support of Publick (sic) Worship and, desiring that they may be incorporated according to law, do hereby declare:

I. The name of the proposed corporation is “The Homestead Hebrew Congregation Rodef Schulom. The words “Rodef Schulom” mean in English “Follow Peace.”

II. The purpose of the said Corporation is the support of the Public Worship of Almighty God according to the faith, Doctrine, discipline and usuages of the Orthodox Hebrew or Israelitish Creed and also to conduct in connection therewith Sunday school for the education of the youth in the faith and tenets of Israel.

III. The business of the said Corporation is to be transacted at Homestead, Allegheny County, Pennsylvania, and the meetings of said Congregation shall be held in some Room or Hall at said Place.

V. The number of Trustees of said Corporation is fixed at five, a majority of whom shall be lay members and the names and residence of those who are chosen Trustees for the first year are

VI. The yearly income of said Corporation, other than that derived from Real Estate shall not exceed the sum of five thousand dollars. Said income shall be in support of [illegible] worship and school, and shall be derived from the membership fee of any one desiring to become a member of said congregation, from weekly or monthly dues, from the members thereof, from the sale of seats in said Congregation, and by voluntary contributions.

VII. Any estate, real or personal, which may be bequeathed, devise or conveyed to said Corporation shall be taken and held to [illegible] to it, subject to the control and disposition of a majority of the lay members thereof or each constituted officers or representative thereof, as shall be composed of a majority of lay members.

IX. (sic) Said Corporation is to have no capital stock.

Witness our Hands and Seals the Ninth day of April in the year of our Lord one thousand eight hundred and ninety four.

State of Pennsylvania
County of Allegheny

Personally appeared before Geo. W. Giles a Notary Public in and for said County, R. Segelman, B. Hibsh, and Sam Markowitz, three of the subscribers to the above and forgoing certificate of Incorporation and in due form of laws personally acknowledged the same to be their act + deed. Witness my Hand and Notarial seal this Ninth, day of April, A.D. 1894.

Before me, the undersigned a Notary Public in and for said County, personally appeared R. Segelman, who being duly sworn, deposes and says that three of the subscribers, to the forgoing Certificate of Incorporation viz affiante R. Segelman and Sam Markowitz + I.S.Grossman are citizens of the United States and of the Commonwealth of Pennsylvania. 1

And now May 12, A.D. 1894, the forgoing certificate of Incorporation having been on file since the twelfth day of April A.D. 1894 and due proof of publication having been made and exhibited to the Court, I do hereby certify that I have examined said certificate, and find the same to be in proper form and within the purposes named in the first class of Corporations specified in Sec. 2. of Act of April 29, 1874 and that said purposes are lawful and not injurious to the community. It is therefore ordered and decreed that the said Certificate of Incorporation be (?) and the same is hereby approved, and that upon the recording of the same and its endorsements and this order in the office of the Recorder of Deeds in and for the County of Allegheny, the subscribers thereto and their associates shall thereforth be a Corporation for the purposes and upon the terms and under the name therein stated. 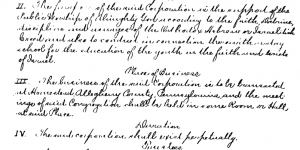 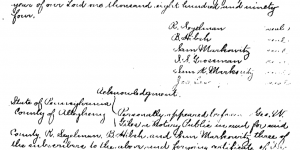 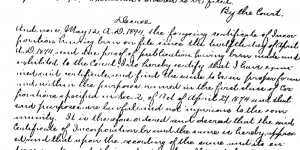