by Homestead Hebrews on May 4, 1924 in Documents, Speeches

At the 30th Anniversary, ten years after the dedication of the second synagogue building, the history of the congregation was read and followed by presentations of Loving Cups to the surviving charter members.

As with the other speeches, this speech was copied more than once in the synagogue’s records.  I can’t determine when the first copy is from, as it was inserted amidst pages from 1902.  I think it is contemporary given that it has speaker notes in it. The second is probably also contemporary; its notable differences from the former are [marked].

Introduction by I Grossman Toast Master.

Some people are born great, others achieve greatness, some have greatness thrust upon them[, that I belong to the last class need to be told. You know].

Minister writing sermon, neither I nor the devil knows what I am going to say. I fear I’ll not come up to expectations. I will not be able to do justice to the task before me, I am a [the kind of] speaker who puts people to sleep. I hope during my discourse you will have pleasant dreams.

I was trying to think of a subject to speak about, Politics, Horseraces, Teapot Dome, and other subjects, finally I thought of some topic always interesting “woman” [“women”] but woman is not a “subject,” they are sovereigns, don’t believe me, ask my wife, or better still ask your own wife.

Presentation speeches for the children, to charter members.

This next section is on a piece of paper pasted in between the pages.  It is in a different handwriting from the rest.  Given that the child saying this section is the same as the child reciting the poem for B. Hepps (below), does this mean that he is finally getting his due after all the nastiness a decade prior?  Or was it directed as Lasdusky, the man Grossman most praised in his other speeches?  The language does match the way he praised him in that otherwise nasty speech.

On this pleasant occasion when we celebrate the 30th anniversary of the H H Cong. the cup of your happiness must be full to overflowing. I can hardly hope that your bliss can be increased by the feeble words of a mere child. Anniversaries like these are a sort of guide post on the road of life, pointing the way to happiness for those who are to follow and proceed in the directions indicated. Your junior partners have instructed me to make this speech taking their guide from the proverb “Truth floweth from the lips of children.” In truth, I am told if one person should be selected among the charter members of this Cong. who has worked the hardest to provide a suitable house of worship, and build up the Cong to the plane on which it now stands this one person perhaps is in our mind (?) to this evening. Every sacrifice deserves recognition, deserves a reward, to me has been given the pleasant honor to present this token of esteem on the one who deserve is mostly, Mr . . Note:  The remaining people were not charter members. 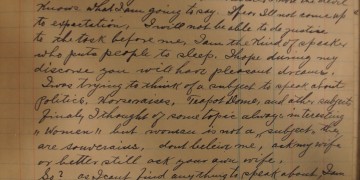 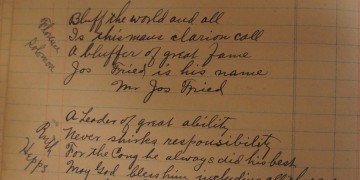 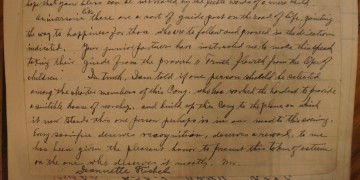 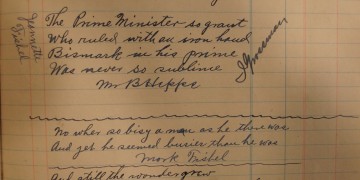