At the time the oral histories were taken in the months following the shul closing, a number of members were still living in the area, though as far I am aware, there are currently no former members of Homestead Hebrew living in Homestead, West Homestead, or Munhall.  On January 22, 1998 an article in The Jewish Chronicle mentions seniors living in the Homestead Senior High Rise who would be served by the expansion of a (non-kosher) food pantry, but I am not aware of who these people are/were. In October of that year, a kosher food pantry opened in Squirrel Hill; an April 8, 1999 article in the Chronicle mentions they expect it to serve the “New American community,” by which they mean immigrants from the Former Soviet Union.  Pittsburgh, like many places in the U.S. with a large Jewish community, became a destination for resettling Russian Jews — more than 2,000 from 1988-2002 (and still coming even then).  The preference was to keep them in Squirrel Hill near the various community services, but a September 26, 2002 article in the Chronicle wrote about the “103 Jews from the former Soviet Union who have relocated to Homestead since 1994, in many cases, not because they wanted to, but because they couldn’t find adequate housing in Squirrel Hill, or because the cost of living simply forced them out the neighborhood.”  Many of these new Jews of Homestead were low-income seniors living on social security who were relocated there through the Allegheny County Housing Authority.  “My sons cried about Homestead,” one related.  “They did not want [us] to move because they think it’s not safe.”  The article reflects that they are “perhaps making history in a small way:  They could be the first sizable Jewish influx into the Mon Valley since the immigration quotas of the 1920s.” One person with no historical perspective on the town’s new residents was its mayor, Betty Esper.  Everywhere else I’ve read about her, she’s been universally praised for her selfless efforts in looking after Homestead during the town’s collapse.  But her comments for this article raised the ire of the Jewish community at that time and will make your skin crawl even today.

Homestead Mayor Betty Esper said she has received complaints from borough residents who wonder how the Soviets were able to housing in the Towers when locals could not.

“Why are outsiders given more privilege than the insiders?” Esper asked. “That’s my problem. I’m an American I think Americans should get first advantage wherever they come from, whether they (the Soviets) like to hear that or not.”

Esper also object to the Housing Authority providing an interpreter for the Soviets, noting that past waves of immigrants didn’t have such a luxury.

She said Homestead has become a dumping place for all kinds of people that may not be welcome in more affluent neighborhoods.

“Every social agency comes to Homestead first and we’re a borough of 4,000 now; everybody dumps everyone in Homestead,” Esper said. “We’re not that NIMBY (not in my backyard), they’re all in our backyard.”

The article goes on to explain that people are taken off the housing authority’s waiting list in the order they arrive and settled where they request; it’s obvious why the Russian Jews would request Homestead, with its close proximity to Squirrel Hill, when no one else would want to live there.  You can read the whole article by clicking on the images above.

No surprise, the mayor’s remarks spurred a number of angry letters in response, published in a number of papers into November.  A Munhall resident wrote:

Mayor Esper, take a step back a little over a century ago and remember who realy built Homestead and where the bulk of its history lies: with immigrants who worked in the steel mills. What is your own heritage? If your father or grandfather was an immigrant, chances are there were a few natives who voiced resentment toward them for taking a job away from a citizen. All these New American wish for is a better life than they had in the former Soviet Union, often living on a few dollars a month in small, cold apartments.

The supervisor of the Refugee and Immigration Service Center of the Jewish Family & Children’s Service wrote:

More than 95 percent have been naturalized…They are refugees no longer; they are New Americans now.

One of the FSU Jews living in Homestead wrote:

Mrs. Esper referred to us as “outsiders,” and that is offensive. We all immigrated to the United States legally and most of us became citizens…It is high time that the mayor knew that we have not been “the Soviets”–for a while and that we share the same rights and responsibilities that all other citizens of the United States…

So who are these people that were “dumped” in Homestead? We left the former Soviet Union as refugees because we were discriminated against as Jews. We worked all our lives and the men fought and won in World War II side by side with the United States against the fascist Germany. We did nothing to tarnish our good names neither before nor after we immigrated to the United States.

At the meeting of our Resident Council on Oct. 10, Mrs. Esper…said that the newspaper accurately reproduced her statements and the opinion that she expressed was that of the mayor of Homestead, rather than a private person.

You can read all the letters by clicking on the images at the bottom of this post.  But I want to end with one reflection on the kind of people these “outsiders” turned out to be.  The article at right is about Bela Skotnevskaya, a childless widow, who left Belarus in 1997 at age 62 after vandals desecrated a Jewish cemetery near her.  She settled in Homestead and began to volunteer daily in the senior center at the Squirrel Hill JCC.  After nine years of contributions, she was selected as the Outstanding Volunteer in Senior Service Award given by the Retired and Senior Volunteer Program of Allegheny County.  She hardly fits Esper’s image of an unwanted person taking more than is her due. 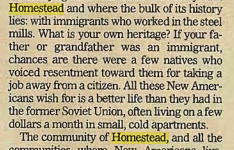 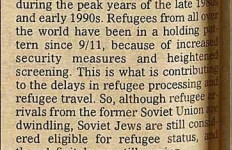 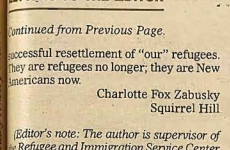 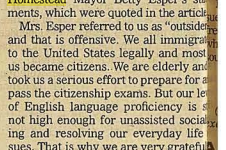 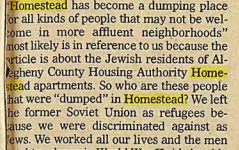 ← Burying the Torahs
Everybody Was Happy Until 1911 →