Florence with her parents Morris and Regina Stahlberg. Morris came to American in 1922 and married Regina Rothstein in the Homestead synagogue on 12/31/1922. (Click to enlarge.)

This post was contributed by Caren Hiedovitz Lever and Barbara Hiedovitz Mandel, the daughters of Florence Stahlberg Hiedovitz (1924-2002).  I first learned about Florence’s artwork, which she created in 1997, when Caren mentioned in early January that it was part of the art collection at the Carnegie Library of Homestead.  Upon viewing it, I felt immediately her love for her home shining forth from the canvas.  I’m excited to be able to share it with all of you, as I can’t imagine a more beautiful representation of the devotion so many feel towards the Homestead community.

I am indebted to Florence in another way.  My research project would not have been possible if there hadn’t been something for me to research from — namely, the congregation’s records, oral histories, and professional photographs in the Rauh Jewish Archives.  When the synagogue closed in 1993, she used her business connections to arrange for these donations to the Historical Society of Western Pennsylvania (the predecessor of the Heinz History History Center).  I often tell people that the Homestead Hebrew Congregation did all the right things when it closed, and much of that derives from Florence’s foresight.

Introduction by Caren and Barbara Wedding picture of Florence and Harold Hiedovitz. They grew up together in Homestead and married during WWII. Harold served as a bombardier. Notice both are wearing wings with a bomb in the center. (Click to enlarge.)

Florence Stahlberg Hiedovitz’s pictorial memoir, My Homestead, is a highly personal collage that recalls her own roots in the Steel Valley community of Homestead during the early twentieth century. The painting depicts a collection of thirty-six images celebrating the life and change of that community. “My Homestead” combines many diverse pictures such as the Homestead Hebrew Congregation’s glass windows and women’s balcony, a steelworker’s emblem, and the early streets of Munhall. It’s a record to the founders of the now defunct Homestead Hebrew Congregation in 1894, just a year and a half after the famous Homestead Steel Strike. It is a reminder of the change in the steel industry that built that community.

“The area will never be what it was,” sighed Hiedovitz. “We can never go back to where we were. But it reminds us of past successes and gives us visions of what the future may be.” She felt it was bashert, a Yiddish word meaning that something is meant to happen, that her maiden name should be Stahlberg, for “stahl” in German means “steel” and “berg” means “town.”

After concentrating on fifty plus years of marriage to Harold, two wonderful daughters and their spouses, four of the most accomplished grandchildren, and a successful twenty-five year career in creative merchandising at Kaufmann’s Department Store, retirement permitted Florence to explore what she never had time to do. Number one on the list was to paint once again. After meeting with artist Kathleen Zimbicki on the JCC Art Scene tour, watercolor became her passion. Her 1995 cancer survival made her confront her own mortality. She realized that every day was a gift and that her time was not infinite. This experience provided her with the impetus to crystallize her inner feelings so that they could be reflected in her art. “My Homestead” gave her the opportunity to tell a story that was important in her life.

What follows is Florence’s explanation of the scenes in her collage.  Each number in the picture below corresponds to part of her description.  At the end of this section, you’ll find a slideshow that will allow you to zoom in more closely on each section of the canvas. My Homestead — A Steel Town, with scenes numbered. (Click to enlarge.)

The genesis of My Homestead was the Homestead Hebrew Congregation, Rodef Shalom (1894-1993).

Its progress and demise similarly mirrored the course of the Homestead Steel Works, whose history also became its legacy.

“We can never go back, but the 36 elements illustrated remind us of our past successes and visions to come.”
–Florence Stahlberg Hiedovitz, 1997 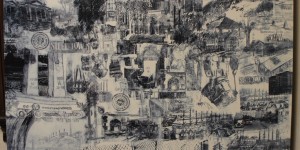 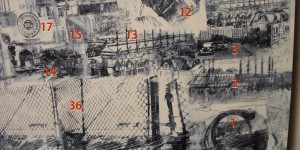 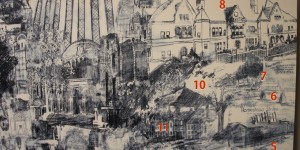 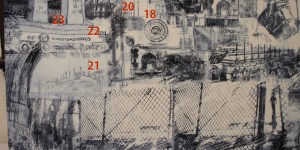 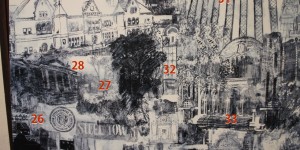 A collage created by Florence appeared on the cover of The Jewish Chronicle in 1999.  Its full dimensions also incorporate the number 18, which stands for life.  (Click to enlarge.)

Florence S. Hiedovitz was Director of Triangle Corner, Ltd, a unique organized program conducted by Kaufmann’s with a commitment to serve the business and professional women in Pittsburgh. Reporting to the Senior Vice-President of Marketing and Advertising, Jerry Eccher, the program was part of the Creative Merchandising Division.

Started in 1968, Triangle Corner, Ltd. was comprised of a 20-member Advisory Board representing the corporate community and the 88 outstanding Pittsburgh women they saluted to represent the role model for their respective careers. Together, the Advisory Board and Salutes acted as catalysts in creating a varied agenda of programs of personal and professional interest to career women and men ranging from fashion update “clinics” to credit and non-credit college classes—and a host of seminars on health, investments, world affairs, book reviews, cultural samplers and public affairs. The Career Networking Day with a coalition of Pittsburgh colleges and universities and a Tennis and Golf Invitational co-sponsored with SAVVY Magazine were benchmarks for future development.

The facilitating of linkages and networking between the providers of information and services to career women was TCL’s greatest contribution. Often, events sponsored by TCL were benefits for commmunity-based institutions. Key in communicating was the publication of THE CORNER POST which Florence edited for l4,000, and “On the Agenda” calendars for l0,000—-plus, the Kaufmann ads in major newspapers and magazines in Pittsburgh.

There was need in 1984, to convene a coalition of presidents representing business and professional organizations in the greater Pittsburgh area who utilized the networking resources of Kaufmann’s Triangle Comer, Ltd. Forum members communicated with one another and worked together on mutual goals. At least ten organizations met weekly at networking luncheon tables reserved in Michael’s Restaurant on the Eleventh Floor.

Retirement from Kaufmann’s came on February l3, 1987, twenty-five years to the day that Florence started working at Kaufmann’s, High on the priority list of things to do became spending more time with husband, Harold, and with children, Caren and Dr. Harry Lever, Barbara and Alan Mandel-and grandchildren, Aaron, Jonathan, Allison and Michael…and as of June 29, 1997, Jodi Sered-Lever, Aaron’s wife. In addition, bridge and fine arts classes at Pitt’s College for Over Sixty were important. A fair amount of time was spent actively on the Boards of the Self-Help Group Network, the Jewish Archives of the Historical Society of Western PA, and the Visual Arts Committee of the Jewish Community Center. Now associated with the Associated Artists of Pittsburgh, Kathryn Logan and Mary Culbertson-Stark assumed the leadership after Florence resigned in March of 1997. The WQED’s VITA Award will be given to Florence in April of 1998 for her work as Chairperson of the Ad Hoc Committee.

For about seven years before entering the work world, Florence dearly remembered classes taken at the Pittsburgh Center of the Arts with Mary Shaw Mahronic Horn and Jean Thoburn. Another priority was to paint again. One of Lila Hirsch Brody’s Art Scene visits included Studio Z. That sparked interest in Kathleen Zimbicki and the watercolor classes she was teaching at the JCC. Over the past decade, there were more classes with Kathleen Zimbicki, Dona Groer, Frank Webb, Donna Hollen-Bolmgren, Donna Rockwell Haas, Cynthia Cooley, Michel Tsouris and Sigrid Shafagh.

Lots of encouragement from friends and family—especially from our grandson, Aaron, made me take time out to do “My Homestead” and “Jewish Poland: A Lost Legacy.”

← The Jews of Homestead and the 1892 Strike
D’var Torah: Parshat Chukkat →